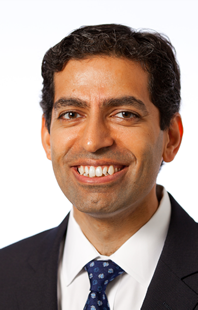 CADTH is pleased to announce that Irfan Dhalla, MD, FRCPC, MSc, BASc, has been selected as the 2017 recipient of the Dr. Maurice McGregor Award, an award that recognizes rising stars in the field of health technology assessment (HTA) early in their careers.

Dr. Irfan Dhalla is Vice-President of Evidence Development and Standards at Health Quality Ontario, and Affiliate Scientist at Li Ka Shing Knowledge Institute at St. Michael’s Hospital. He is a strong advocate of evidence-based medicine, and continues to practise general internal medicine at St. Michael’s Hospital, where he cares for in-patients and teaches medical students and resident physicians.

Dr. Dhalla obtained a bachelor’s degree in engineering physics from the University of British Columbia, a medical degree from the University of Toronto, and a master’s degree in health policy, planning, and financing from the London School of Economics and Political Science, and the London School of Hygiene & Tropical Medicine, which he completed as a Commonwealth Scholar. During his master’s degree, he spent several months at the National Institute for Health and Care Excellence (NICE), where he examined the use of “only in research” recommendations.

An accomplished physician and scientist, Dr. Dhalla has fundamentally revitalized the HTA program at Health Quality Ontario since he began there in 2013 and has been instrumental in enhancing patient involvement evidence development and quality standards.