PPIs are commonly prescribed and widely used in Canada, with 12.4 million PPI prescriptions dispensed in 2004. However, questions exist about whether PPIs are being prescribed and used appropriately. Both over- and under-usage of PPIs have been reported, and costs associated with inappropriate prescribing and use may be considerable. To optimize the prescribing and use of PPIs in Canada, the evidence needed to be examined and the results communicated effectively to policy- makers, prescribers, and consumers.

CADTH was directed by the federal, provincial, and territorial (F/P/T) governments to focus on the optimal use of PPIs in Canada. CADTH conducted this project under its former Canadian Optimal Medication Prescribing and Utilization Service (COMPUS) program. CADTH undertook a multi-step process to:

The CADTH PPI project has resulted in:

Through the uptake and adoption of the CADTH PPI key findings:

CADTH addressed the use of PPIs for the management of GERD, dyspepsia, PUD, Helicobacter pylori infection, and nonsteroidal anti-inflammatory drug-associated ulcer.

The Canadian Agency for Drugs and Technologies in Health (CADTH) assists health care providers, decision- makers, and consumers with the local implementation of optimal drug therapy, including the use of proton pump inhibitors (PPIs) — a class of medications used to treat common gastrointestinal (GI) conditions. We do this by offering intervention tools based on our evidence-based clinical and cost-effectiveness information (detailed in our Optimal Therapy Reports), which you can access to help implement optimal PPI therapy in your area. Contact us if you would like our assistance in tailoring any of these tools to meet your unique needs. 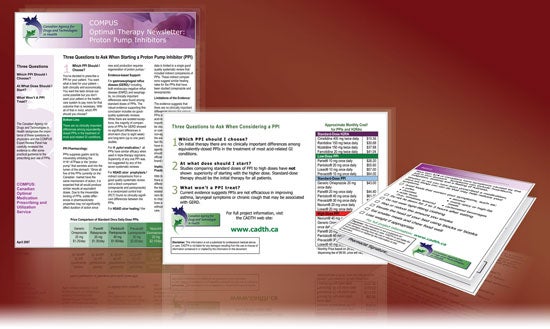 To help decision-makers evaluate optimal therapy initiatives, CADTH has also developed a series of generic tools that can be applied across health topics. These generic tools including an audit and feedback guide, an evaluation framework, and academic detailing templates. 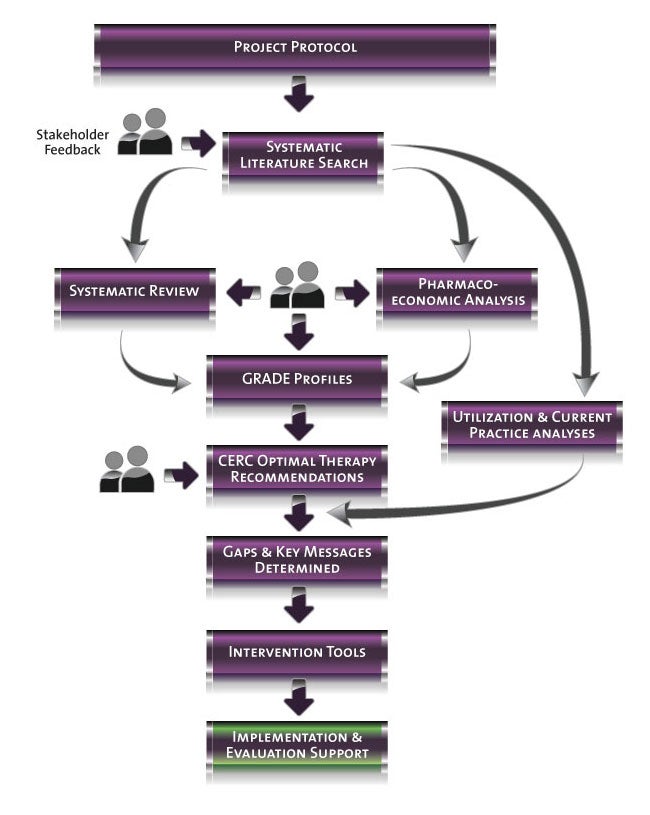 To assist health care providers, policy-makers, and consumers in making well-informed decisions about the prescribing and use of proton pump inhibitors, our completed research and resulting recommendations are available in a series of Optimal Therapy Reports that provide:

Economic Models and Conclusions for the Treatment of Dyspepsia; and Gastroesophageal Reflux Disease-Related Heartburn and the Prevention of Non-steroidal Anti-inflammatory Drug-Induced gastrointestinal Complications

Optimal Use
Back to Top